This article is a tutorial on how to trick Windows XP into giving you system privileges using Binary Planting. There have been other previlege escalation methods which are no longer useable:

Microsoft Windows services, formerly known as NT services, enable you to create long-running executable applications that run in their own Windows sessions. These services can be automatically started when the computer boots, can be paused and restarted, and do not show any user interface. Each service executes in the security context of a user account.

You can specify one of the following special accounts instead of specifying a user account for the service:

LocalSystem has extensive privileges on the local computer, and acts as the computer on the network. Its token includes the NT AUTHORITY\SYSTEM and BUILTIN\Administrators SIDs; these accounts have access to most system objects.

If you open services.msc you can see many Windows services running with LocalSystem account. Most of the Windows services run under the process svchost.exe by supplying different command line parameters to it. Now imagine what will happen if we replace svchost.exe with our own custom svchost.exe having malicious code. This file replacement will result in privelege escalation and execution of exploit code. This can even happen remotely if you are able to connect to remote machine and replace svchost.exe. Fortunately, svchost.exe and many of the Windows critical executables are protected by [Windows File Protection] (http://en.wikipedia.org/wiki/Windows_File_Protection)

However, depending on your computer configuration, there will be some other 3rd party services which have been installed and run under the different process. For example, in the screenshot below there is a service called Google Update service which runs under LocalSystem account in the process GoogleUpdate.exe. This process is generally called from this location C:\Program Files\Google\GoogleUpdate.exe.

Now, even as a restricted user, nobody is stopping me from deleting or replacing this file. If we replace this GoogleUpdate.exe with the malicious one and then restart the Google Update Services, no file integrity check is performed by OS or Google Update Services to verify that file being executed is original or malicious. This makes the system vulnerable to be exploited since we can run any malicious code under System account simply by replacing this file and then executing the service, which can be done as restricted user. 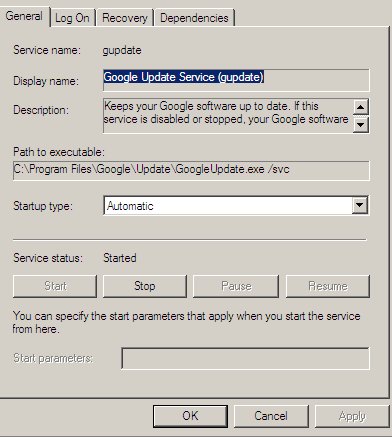 Here is a simple Windows Service code which produces the executable called GoogleUpdate.exe , creates a user and adds it to the Administrators group. 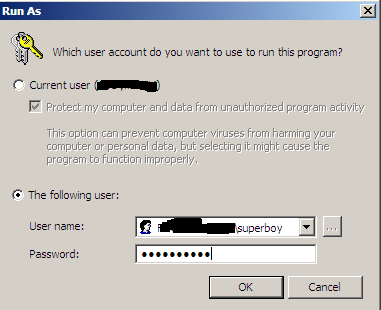 The exploit code can be downloaded from this github repository.